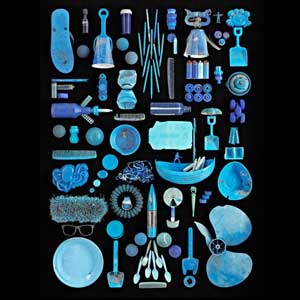 By Margaret Rhodes from FastCompany.com. Visit BarryRosenthal.com for botanical photos and artist portraits.

Before photography and the Internet, developments in botany depended heavily on artists, rather than on foragers and scientists. Painters would create painstakingly technical illustrations of flora and fauna found in the wild, to be housed in botanical libraries for study. Today, a more modern look at nature inevitably reveals garbage alongside plants and flowers. On one of his routine plant-collecting expeditions at a beach bird sanctuary, photographer Barry Rosenthal’s eye began to wander, and eventually settled on some garbage on the sand. “It came in an organic way, rather than sitting around thinking about what to do,” Rosenthal tells Co.Design. “Along the way, I found these things along the side of the road. They were garbage or objects that had been transformed by the elements. They were and still are kind of attractive to me.”

To an outsider, Barry Rosenthal probably looks like an eccentric and picky garbage collector. Before this series, his work focused on still-life shots of botanicals. Now, his magpie method includes combing over beaches in the greater New York area–mostly around Brooklyn and New Jersey — and carrying off around two or three garbage bags filled with detritus, which he arranges in botanical-inspired compositions. “I take a lot of stuff because I don’t know what I’m going to find or how it will work out later,” he says. “I’d rather not judge what to take and what not. What I find influences what I’m going to do.”

In the early days of compiling the Found in Nature series, the Brooklyn-based artist worked out of a portable studio, so each collection had to fit onto a white backdrop of 18 by 24 inches. After he found studio space at the Brooklyn Army Terminal, his pieces started to scale in size and specificity. Rosenthal’s studio space also doubles as a trash-library of sorts, where he can start seedlings of collections, and see where they go. The study of all vintage shoe soles, for example, would not have been possible otherwise.

Rosenthal’s work begs for an environmental tagline. And yes, he’s “kind of shocked and disgusted” by what he finds. But he also prefers to let the work speak for itself. And it does: A group of McDonald’s and Dunkin’ Donuts plastic throwaway cups, posing as a botanical study, is not a subtle message.