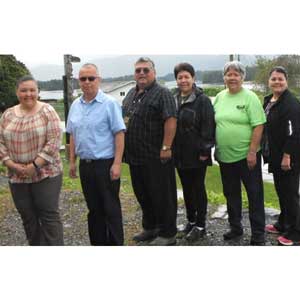 By George Dvorsky from io9.com:

Members of the Metlakatla community recently collaborated with scientists in ongoing genetic studies of Native peoples in British Columbia. Those pictured asked that their names be withheld. Credit: Metlakatla Treaty Office.

Back in the 1980s, the 5,500 year-old remains of an aboriginal woman were found on a British Columbia island. Now, using a powerful new genetic scanning technique, her remains have been linked to actual living relatives — a span of about 200 generations.

The genetic study, which was led by a team of U.S. and Canadian anthropologists, utilized a new technique in which the complete mitochondrial genome of ancient individuals can be analyzed (i.e. low cost, high efficiency sequencing of mitogenomes in both living and deceased individuals along strictly maternal lines). It’s allowing researchers to not just reconstruct millennia-spanning lines of maternal descent, but also establish evidence of geographical occupation over vast expanses of time.

And indeed, archaeologists had previously identified house structures in the region that maintained similar characteristics to this time period. But this new genetic study has incontrovertibly demonstrated, in the words of the researchers, “continuity in residence patterns.”

The unnamed B.C. woman, a member of the Tsimshian clan, lives close to the prehistoric burial sites along B.C.’s North Coast near the city of Prince Rupert.

“This is the beginning of the golden era for ancient DNA research because we can do so much now that we couldn’t do a few years ago because of advances in sequencing technologies,” study co-leader Ripan Malhi, an anthropologist and professor of genomic biology at the University of Illinois, said in a research summary. “We’re just starting to get an idea of the mitogenomic diversity in the Americas, in the living individuals as well as the ancient individuals.”

Malhi told Postmedia News it was “pretty surprising” when the research team established a clear genetic link between the 5,500-year-old female — whose remains had been excavated from an ancient settlement site on Lucy Island, B.C. — and the 2,500-year-old individual (also from Dodge Island).

That surprise led to elation when the team found that the directly related prehistoric individuals had “the exact same mitogenome of a living Tsimshian person” — a discovery that was “especially surprising,” said Malhi, “since it’s a rare lineage. In my mind, I expect that lots of these rare lineages would have gone extinct after European contact and colonization because of the high mortality that was associated with contact” as cultures clashed and the introduction of Old World diseases decimated many New World populations.

Interestingly, the new technique could have significant implications to First Nations’ land claims and treaty rights. The tool could be used by aboriginal groups to conclusively demonstrate their links to ancestral lands.