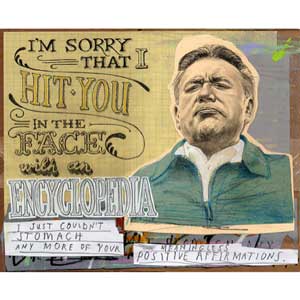 Brilliant and hilarious artwork from British artist David Fullarton. His solo show, I Can’t Apologise Enough, is on until June 9, 2013 at The Compound Gallery in Oakland, CA (see below).
. Of most immediate importance is the fact that I have a solo exhibition of all of my Apology Drawings on right now at The Compound Gallery in Oakland, CA. I’m afraid the opening reception has come and gone, but the gallery is open Thursday – Sunday 12 noon to 6 pm, and the show is on until Sunday June 9th. This is also the date of The Closing Tea, where I’ll be delivering what has optimistically been labeled an ‘Artist Talk’. And, if you can’t make that, you can watch the whole debacle streaming LIVE on The Compound Gallery website. You can even send in awkward questions, in real time, for me to ignore.

Details of what you’ve missed and what’s still to come!

If you can’t wait till then to get answers to your many questions you might find they have already been answered in this interview about the show which appeared on Jeremyriad.com. There’s even a little Vine video of me in action.

I sincerely hope you can make along to the show, but if your impressively hectic schedule doesn’t allow it, you can still buy a little Apology of your own right now at the Compound Online Shop. I’ve also produced a couple of limited runs of Apology letter press prints which are for sale at a very reasonable prices at the show, and probably a bit later online.