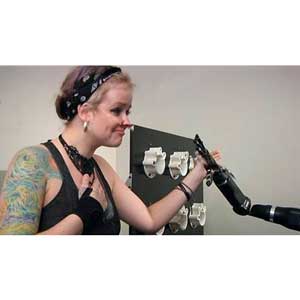 PITTSBURGH — Giving a high-five. Rubbing his girlfriend’s hand. Such ordinary acts — but a milestone for a paralyzed man.

True, a robotic arm parked next to his wheelchair did the touching, painstakingly, palm to palm. But Tim Hemmes made that arm move just by thinking about it.

Emotions surged. For the first time in the seven years since a motorcycle accident left him a quadriplegic, Hemmes was reaching out to someone — even if it was only temporary, part of a month-long science experiment at the University of Pittsburgh.

“It wasn’t my arm but it was my brain, my thoughts. I was moving something,” Hemmes says. “I don’t have one single word to give you what I felt at that moment. That word doesn’t exist.”

The Pennsylvania man is among the pioneers in an ambitious quest for thought-controlled prosthetics to give the paralyzed more independence — the ability to feed themselves, turn a doorknob, hug a loved one.

The goal is a Star Trek-like melding of mind and machine, combining what’s considered the most humanlike bionic arm to date — even the fingers bend like real ones — with tiny chips implanted in the brain. Those electrodes tap into electrical signals from brain cells that command movement. Bypassing a broken spinal cord, they relay those signals to the robotic third arm.

This research is years away from commercial use, but numerous teams are investigating different methods.

At Pittsburgh, monkeys learned to feed themselves marshmallows by thinking a robot arm into motion. At Duke University, monkeys used their thoughts to move virtual arms on a computer and got feedback that let them distinguish the texture of what they “touched.”

Through a project known as BrainGate and other research, a few paralyzed people outfitted with brain electrodes have used their minds to work computers, even make simple movements with prosthetic arms.

But can these neuroprosthetics ever offer the complex, rapid movements that people would need for more practical, everyday use?

“We really are at a tipping point now with this technology,” says Michael McLoughlin of the Johns Hopkins University Applied Physics Laboratory, which developed the humanlike arm in a $100 million project for DARPA, the Pentagon’s research agency.

Pittsburgh is helping to lead a closely watched series of government-funded studies over the next two years to try to find out. A handful of quadriplegic volunteers will train their brains to operate the DARPA arm in increasingly sophisticated ways, even using sensors implanted in its fingertips to try to feel what they touch, while scientists explore which electrodes work best.

“Imagine all the joints that are in your hand. There’s 20 motions around all those joints,” says Pittsburgh neurobiologist Andrew Schwartz. “It’s not just reaching out and crudely grasping something. We want them to be able to use the fingers we’ve worked so hard on.”

The 30-year-old Hemmes’ task was a much simpler first step. He was testing whether a new type of chip, which for safety reasons the Food and Drug Administration let stay on this initial volunteer’s brain for just a month, could allow for three-dimensional arm movement.

He surprised researchers the day before the electrodes were removed. The robotic arm whirred as Hemmes’ mind pushed it forward to hesitantly tap palms with a scientist. Then his girlfriend beckoned. The room abruptly hushed. Hemmes painstakingly raised the black metal hand again and slowly rubbed its palm against hers a few times.

“It was awesome,” is the decidedly unscientific description from the normally reserved Dr. Michael Boninger, rehabilitation chief at the University of Pittsburgh Medical Center. “To interact with a human that way. … This is the beginning.”