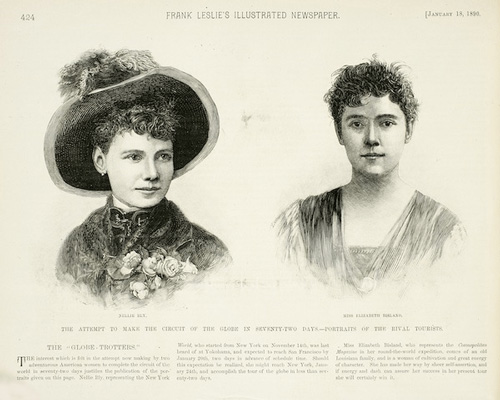 By Maria Popova from brainpickings.org:

Two Victorian women race against each other around the world, countering the cultural inertia of their era. “Anything one man can imagine, other men can make real,” science fiction godfather Jules Verne famously proclaimed. He was right about the general sentiment but oh how very wrong about its gendered language: Sixteen years after Verne’s classic novel Eighty Days Around the World, his vision for speed-circumnavigation would be made real — but by a woman. On the morning of November 14, 1889, Nellie Bly, an audacious newspaper reporter, set out to outpace Verne’s fictional itinerary by circumnavigating the globe in seventy-five days, thus setting the real-world record for the fastest trip around the world. In Eighty Days: Nellie Bly and Elizabeth Bisland’s History-Making Race Around the World (public library), Matthew Goodman traces the groundbreaking adventure, beginning with a backdrop of Bly’s remarkable journalistic fortitude and contribution to defying our stubbornly enduring biases about women writers:

No female reporter before her had ever seemed quite so audacious, so willing to risk personal safety in pursuit of a story. In her first exposé for The World, Bly had gone undercover … feigning insanity so that she might report firsthand on the mistreatment of the female patients of the Blackwell’s Island Insane Asylum. … Bly trained with the boxing champion John L. Sullivan; she performed, with cheerfulness but not much success, as a chorus girl at the Academy of Music (forgetting the cue to exit, she momentarily found herself all alone onstage). She visited with a remarkable deaf, dumb, and blind nine-year-old girl in Boston by the name of Helen Keller. Once, to expose the workings of New York’s white slave trade, she even bought a baby. Her articles were by turns lighthearted and scolding and indignant, some meant to edify and some merely to entertain, but all were shot through with Bly’s unmistakable passion for a good story and her uncanny ability to capture the public’s imagination, the sheer force of her personality demanding that attention be paid to the plight of the unfortunate, and, not incidentally, to herself.

For all her extraordinary talent and work ethic, Bly’s appearance was decidedly unremarkable — a fact that shouldn’t matter, but one that would be repeatedly remarked upon by her critics and commentators, something we’ve made sad little progress on in discussing women’s professional, intellectual, and creative merit more than a century later. Goodman paints a portrait of Bly:

She was a young woman in a plaid coat and cap, neither tall nor short, dark nor fair, not quite pretty enough to turn a head: the sort of woman who could, if necessary, lose herself in a crowd.
[…]
Her voice rang with the lilt of the hill towns of western Pennsylvania; there was an unusual rising inflection at the ends of her sentences, the vestige of an Elizabethan dialect that had still been spoken in the hills when she was a girl. She had piercing gray eyes, though sometimes they were called green, or blue-green, or hazel. Her nose was broad at its base and delicately upturned at the end — the papers liked to refer to it as a “retroussé” nose — and it was the only feature about which she was at all self-conscious. She had brown hair that she wore in bangs across her forehead. Most of those who knew her considered her pretty, although this was a subject that in the coming months would be hotly debated in the press.

I asked the inimitable Wendy MacNaughton — whose recent Lost Cat is one of the most soul-warming things to come by in years and who has previously illustrated such literary treats as Susan Sontag’s insights on art and on love, Sylvia Plath’s influences, and Gay Talese’s morphology of New York cats — to bring her ink-and-watercolor magic to Bly’s adventure: Circumstances demanded of Bly packing so masterful and efficient that it would put to shame even today’s most seasoned frequent flyers:

Bly had decided that she would take but a single bag, a small leather gripsack into which she would pack everything, from clothing to writing implements to toilet articles, that she might require for her journey; being able to carry her own bag would help prevent any delays that might arise from the interference or incompetence of porters and customs officials. As her traveling dress she had selected a snugly fitted two-piece garment of dark blue broadcloth trimmed with camel’s hair. For warmth she was taking a long black-and-white plaid Scotch ulster coat, with twin rows of buttons running down the front, that covered her from neck to ankles; and rather than the hat and veil worn by most of the fashionable oceangoing women of the time, she would wear a jaunty wool ghillie cap — the English-style “fore-and-aft” cap later worn by Sherlock Holmes in the movies — that for the past three years had accompanied her on many of her adventures. The blue dress, the plaid ulster, the ghillie cap: to outward appearances it was not an especially remarkable outfit, but before long it would become the most famous one in all the world. UPDATE: By popular demand, the illustrated packing list is now available as a print, with proceeds benefiting the Women’s Media Center in honor of Bly.

But, as if the ambitious adventure weren’t scintillating enough, the story takes an unexpected turn: That fateful November morning, as Bly was making her way to the journey’s outset at the Hoboken docks, a man named John Brisben Walker passed her on a ferry in the opposite direction, traveling from Jersey City to Lower Manhattan. He was the publisher of a high-brow magazine titled The Cosmopolitan, the same publication that decades later, under the new ownership of William Randolph Hearst, would take a dive for the commercially low-brow. On his ferry ride, Walker skimmed that morning’s edition of The World and paused over the front-page feature announcing Bly’s planned adventure around the world. A seasoned media manipulator of the public’s voracious appetite for drama, he instantly birthed an idea that would seize upon a unique publicity opportunity — The Cosmopolitan would send another circumnavigator to race against Bly. To keep things equal, it would have to be a woman. To keep them interesting, she’d travel in the opposite direction.

And so it went:

Elizabeth Bisland was twenty-eight years old, and after nearly a decade of freelance writing she had recently obtained a job as literary editor of The Cosmopolitan, for which she wrote a monthly review of recently published books entitled “In the Library.” Born into a Louisiana plantation family ruined by the Civil War and its aftermath, at the age of twenty she had moved to New Orleans and then, a few years later, to New York, where she contributed to a variety of magazines and was regularly referred to as the most beautiful woman in metropolitan journalism. Bisland was tall, with an elegant, almost imperious bearing that accentuated her height; she had large dark eyes and luminous pale skin and spoke in a low, gentle voice. She reveled in gracious hospitality and smart conversation, both of which were regularly on display in the literary salon that she hosted in the little apartment she shared with her sister on Fourth Avenue, where members of New York’s creative set, writers and painters and actors, gathered to discuss the artistic issues of the day. Bisland’s particular combination of beauty, charm, and erudition seems to have been nothing short of bewitching.

But Bisland was no literary bombshell. Wary of beauty’s fleeting and superficial nature — she once lamented, “After the period of sex-attraction has passed, women have no power in America” — she blended Edison’s circadian relentlessness and Tchaikovsky’s work ethic:

[S]he took pride in the fact that she had arrived in New York with only fifty dollars in her pocket, and that the thousands of dollars now in her bank account had come by virtue of her own pen. Capable of working for eighteen hours at a stretch, she wrote book reviews, essays, feature articles, and poetry in the classical vein. She was a believer, more than anything else, in the joys of literature, which she had first experienced as a girl in ancient volumes of Shakespeare and Cervantes that she found in the library of her family’s plantation house. (She taught herself French while she churned butter, so that she might read Rousseau’s Confessions in the original — a book, as it turned out, that she hated.) She cared nothing for fame, and indeed found the prospect of it distasteful. And yet, despite their competitive circumstances and seemingly divergent dispositions, something greater bound the two women together, some ineffable force of culture that quietly united them in a bold defiance of their era’s normative biases:

On the surface the two women … were about as different as could be: one woman a Northerner, the other from the South; one a scrappy, hard-driving crusader, the other priding herself on her gentility; one seeking out the most sensational of news stories, the other preferring novels and poetry and disdaining much newspaper writing as “a wild, crooked, shrieking hodge-podge,” a “caricature of life.” Elizabeth Bisland hosted tea parties; Nellie Bly was known to frequent O’Rourke’s saloon on the Bowery. But each of them was acutely conscious of the unequal position of women in America. Each had grown up without much money and had come to New York to make a place for herself in big-city journalism, achieving a hard-won success in what was still, unquestionably, a man’s world.

Eighty Days goes on to trace the thrilling counter-journeys as Bly and Bisland raced against each other, in the process unweaving the very fabric of Victorian culture and emerging as true reconstructionists of women’s place in the media world.