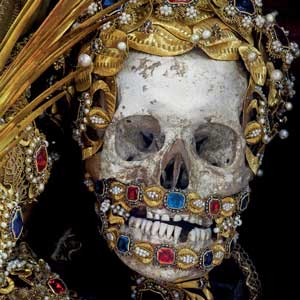 In a forthcoming book titled Heavenly Bodies: Cult Treasures & Spectacular Saints from the Catacombs, Los Angeles photographer Paul Koudounaris brings before his lens bejeweled skeletons long-lost in the catacombs of Rome. The remains were first unearthed in 1578, when they were disbursed throughout Catholic christendom as saintly relics. But according to Koudounaris, who also penned a 2011 volume on the subject, The Empire of Death: A Cultural History of Ossuaries and Charnel Houses, the true identities of the skeletons remains a mystery.

The relics, all opulent finery bleating against the stiff repose of death, reprise and damn the famous “almost-instinct” expressed in the closing lines of Philip Larkin’s “An Arundel Tomb”: if love won’t survive us, at least the gaudy ornaments of material piety might. Hope everyone had a terrific Fashion Week!

Skull of St. Getreu in Ursberg

St. Friedrich at the Benedictine abbey in Melk

Heavenly Bodies Cult Treasures & Spectacular Saints from the Catacombs by Paul Koudounaris will be released on October 8, 2013 by Thames & Hudson.