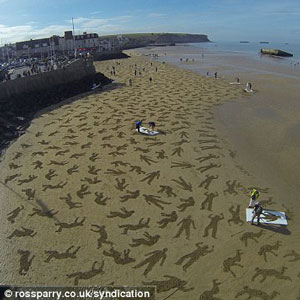 By Aaron Sharp from dailymail.co.uk:

A pair of British artists have created this stunning installation of 9,000 silhouettes on a D-Day Landings beach to mark international Peace Day.

The project, named, ‘The Fallen’ is a tribute to the civilians, German forces and Allies who lost their lives during the Operation Neptune landing on June 6, 1944.

The design was the brainchild of Jamie Wardley, 33, and Andy Moss, 50.

Together with a team of volunteers the pair travelled to Arromanches beach, Normandy, to create the silhouettes, which were individually drawn into the sand. Moving: The Peace Day tribute is a poignant reminder the thousands who died during Operation Overlord Concept: According to artists Jamie Wardley, 33, and Andy Moss, 50, the idea behind the piece was to create a visual representation of loss on an unimaginable scale

Those taking part made the shape of a person by putting down a stencil and raking the surface to create a distinctive figure.

The shapes were then left to the mercy of the tide which washed away the ‘fallen’ after around four and a half hours.

Speaking of the idea behind the project Wardley said: ‘The Fallen is a sobering reminder of what happens when peace is not present.

‘The idea is to create a visual representation of what is otherwise unimaginable, the thousands of human lives lost during the hours of the tide during the Second World War Normandy landings.

‘People understand that so many lives were lost that day but it’s incredibly difficult to picture that number.’ Sand men: The team of artists and volunteers created 9,000 of the shadows which were eventually reclaimed by the sea Teamwork: The project was originally made of 60 people, but after locals learned about the tribute they quickly joined in Lending a hand: By the end of the day it is estimated that 500 people had chipped in to create the stunning beach art

‘You could see the horrific casualty of war when you stood on the cliff looking down at the beach.

‘Watching the tide come in and wash the bodies away was symbolic of all the lives lost in all wars, not just during the Normandy Landings.’

Veterans and families, including some who have lost loved ones in recent conflicts have been involved in the project.

Wardley, who has been working with partner since 2009, said: ‘We turned up to the beach with a team of 60 people but by the end we had over 500 people taking part.

‘There were people from all over the world who had heard about the event and travelled all the way to France to take part. Unity: Operation Neptune is remembered as one of the great showings of wartime unity as the Allied forced launched their assault on Nazi occupied France Reclaimed: The installation was designed so that the sea would wash over the bodies and wipe them from the beach in a moving reminder of the tragedy of war Achievement: Artists Andy Moss, right and Jamie Wardley, left said they hoped their art would remind people of the value of peace.

‘There were others who happened to be walking by and wanted to get involved.

‘It showed that people from all over totally understood the message behind it and I found it very overwhelming.

‘Some people told us that they had lost family in the Second World War and others said they had lost loved ones in Afghanistan and wanted to pay a tribute to them.

‘We finished all the stencils at about 7.30pm and everyone gathered and waited for the tide to come in.

‘The last silhouette was washed away at about 10pm and it was incredibly moving.” The moment: Commando troops from a landing craft arrive on Normandy beaches on D-Day, June 6, 1944 Hiding in darkness: Royal Marines on D-Day Beach as they made their early morning landings on Utah Beach American assault troops move onto a beach in Normandy France, on D-Day during Operation Overlord 1944