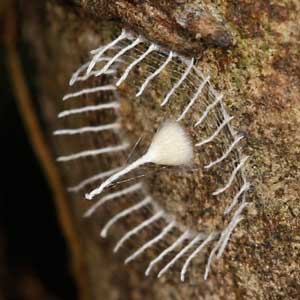 Something in the Peruvian Amazon is making weird, intricate structures that resemble white picket fences surrounding an Isengard-like spire.

No one has any idea who the mysterious craftsbug (fungus? spider?) is, or what the structure is even used for, excepting the fence part, which almost makes sense. Nobody, not even the scientists. We asked.

Troy Alexander, a graduate student at Georgia Tech, spotted the first of these structures on June 7. The little, seemingly woven fence was parked on the underside of a blue tarp near the Tambopata Research Center, in southeastern Peru. He later spotted three more of the bizarre enclosures on tree trunks in the jungle.

“All of them were on the small island used to view the parrot clay lick at Tambopata Research Center,” Alexander said. He described the fences as small – about 2 centimeters across — and posted a second photo of the structure on the subreddit whatsthisbug last week, hoping someone could explain the origin of the fortified mini-Maypoles. No one could.

We noticed the weirdness last Thursday, when Phil Torres, a biologist who also works at Tambopata, posted a link on Twitter. In the intervening days, we’ve tried to find out what on Earth could have made these tiny towers.

But it turns out that even scientists who study such things haven’t a clue.

“I have no idea what made it, or even what it is,” said William Eberhard, an entomologist with the Smithsonian Tropical Research Institute.

“I’ve seen the photo, but have no idea what animal might be responsible,” echoed Norm Platnick, curator emeritus of spiders at the American Museum of Natural History.

“I don’t know what it is,” said arachnologist Linda Rayor, of Cornell University. “My guess is something like a lacewing, but I don’t really know.”

We have several more inquiries out, and will update this story as responses — mystified or not — come in.

Here are a few more comments:

“I do not know what organism made it. Never seen such a structure before,” said Jonathan Coddington, who studies spiders and is associate director for science at the National Museum of Natural History.

We asked WIRED’s incoming bug blogger, entomologist Gwen Pearson, if she had any thoughts on what the strange and beautiful structure could be. “The general consensus amongst people I know is this group,” she said, referencing moths in the Bucculatricidae family. But, “I would have gone with a relative of this group in Vietnam,” she noted, pointing toward the Urodidae family, known for weaving basket-like cocoons.

“We are all guessing,” Pearson said. “We have no freakin’ clue. And that’s my expert opinion.”

Suspecting that some sort of Lepidopteran (a butterfly or moth) might be responsible for the design, we’ve begun querying entomologists who specialize in these organisms. “I have no idea,” said Todd Gilligan of Colorado State University, and president of The Lepidopterists’ Society. “Some moths construct an ‘egg fence’ around eggs, using scales from the abdomen to protect the eggs,” he said. “So constructing fences around objects isn’t unheard of, but I haven’t seen anything like this before.”

Suggestions from the Interwebs have ranged from an incomplete cocoon, to the work of a moth in the Bucculatricidae family, to a spider from Mars. Alexander’s favorite theory, described on Facebook, is that “there are spider eggs in the base of the pole, and the spiderlings climb the pole and sail away on silken parachutes, protected by the fence the whole time.”

Conclusion: The structure itself, and the organism that made it, are still a mystery.