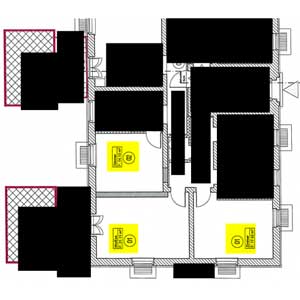 Please see the “News / Edits” section as I will post edits in there from now on in order not to make total crap out of the Paper’s outline. In this way, I keep this article up-to-date for future visitors and also write new blog posts on the topic for RSS users.

In this article I present in which way scanners / copiers of the Xerox WorkCentre Line randomly alter written numbers in pages that are scanned. This is not an OCR problem (as we switched off OCR on purpose), it is a lot worse – patches of the pixel data are randomly replaced in a very subtle and dangerous way: The scanned images look correct at first glance, even though numbers may actually be incorrect. Without a fuss, this may cause scenarios like:

To make things even more worse: The copiers in question are the common Xerox WorkCentres, and Xerox seemed to be unaware of the issue until we found out about it last Wednesday. Whats more, not only one different WorkCentre model seems to be affected, as we tested at least two with this issue (Xerox WorkCentre 7535 and 7556). Additionally, the current software release, as installed by xerox support, did not solve the issue, thus, the issue existed on the very old release we had installed, as well as on a very new one. The error has been confirmed by a xerox rental firm in the meantime, and Xerox is investigating as well, so it does not seem to be some dumb handling error or something similar (if I was thinking this, I of course would not publish it here).

As a result, anyone using those WorkCentres has to ask himself:

Even though Xerox seems eager to solve the issue, because of the possible dangers an immediate publication of the issue is advisable. This is what I want to do with this article.

The rest of the article is organized as follows.

Edit5, Aug 6. 2002 CEST: Today, I had half an hour of conference call with two of Xerox’s leaders, and we sorted things out. Here is an upshot of the facts.

Edit3, Aug 6. 0943 CEST: According to my current blog post, there is now a section of reportedly affected devices added to the tech section of this article.

Edit2, Aug 5th, 1517 CEST: There are first emails coming in by people able to reproduce the error. Also: There might other product lines be affected! Trying to get more information. Click here for the corresponding blog post – the reason for the edits on this original article is to keep this page updated even though publishing new blog posts.

Edit: In the last section, it is now sketched that the reason for the issue may be a misconfigured JBIG 2 compression.

Examples and how we found out

Firstly, I present to you a complete original version of the affected construction plan part. After this, the wrong numbers will be presented. Click to enlarge. I added the yellow marks myself to show you where the errors will occur. Let us name the upper one “place 1”, the lower left “place 2” and the lower right “place 3”.

Now, let us scan the construction plan and get a PDF file from it. No OCR, just plain image. Then, we get wrong square meter numbers at the three places

(Yeah, couldn’t believe it, too). The screen shots of the erroneous places are organized in the below table. There is one additional line in the table for the original patches. The Xerox WorkCentre 7535 always produced the same errors; this is why we only need one line for it in the table. In contrast, the WorkCentre 7556 randomly produced different numbers, this is why I present three lines for three runs with different errors.

I know that the resolution is not too fine, but the numbers are clearly readable. Additionally, obviously, these are no simple wrong pixels, but whole image patches are mixed up or copied. I repeat: This is not an OCR problem, but of course, I can’t have a look into the software itself, maybe OCR is still fiddling with the data even though we switched it off.

Next example: Some cost table, scanned on the WorkCentre 7535. As we are used to, a correct-looking scan at the first glance, but take a closer look. This error was found because usually, in such cost tables, the numbers are sorted ascending.

The 65 became an 85 (second column, third line). Edit: I’m getting emails telling me that also a 60 in the upper right region of the image became a 80. Thanks! This is not a simple pixel error either, one can clearly see the characteristic dent the 8 has on the left side in contrast to a 6. This scan is several weeks old – no one can say how many wrong documents have been produced by the Xerox machines in the mean time.

Here some tech detail in order to enable you reproduce the errors:

Note that I did not reproduce the Error on all of these myself, so except for the 7535 and 7556, take the information as hearsay.

After the cost table, I printed some numbers, scanned them, OCRed them and compared them to the original ones. As the OCR produces errors, by itself, one obviously has to check by hand for false positives when performing this. I took Arial, 7pt as a test font, and the WorkCentre 7535 with the newer of the aboved named Software version as a test machine. The scan settings were like above. And again, a lot of sixes were replaced by eights: (only a few of the errors are marked yellow for the sake for laziness):

In case you want to have a look for yourself:

Assumptions on the causes (EDIT)

The error does not occur if PDFs are scanned with OCR, or TIFs are scanned (the latter seems plausible, as the pure image data should be saved into the TIF). Additionally, there seems to be a correlation between font size, scan dpi used. I was able to reliably reproduce the error for 200 DPI PDF scans w/o OCR, of sheets with Arial 7pt and 8pt numbers. Overall it looks like some sort of compression algorithm using patches more than once (I think I could even identify some equally-pixeled eights).

Edit: It seems that the above thought was not that wrong at all. Several mails I got suggest that the xerox machines use JBIG2 for compression. This algorithm creates a dictionary of image patches it finds “similar”. Those patches then get reused instead of the original image data, as long as the error generated by them is not “too high”. Makes sense.

This also would explain, why the error occurs when scanning letters or numbers in low resolution (still readable, though). In this case, the letter size is close to the patch size of JBIG2, and whole “similar” letters or even letter blocks get replaced by each other.

Of course, if Xerox would have chosen the patch size in a way enabling whole, readable letters to fit into the patches, this would be grossly negligent. Also, it would shed light on how these machines are tested, as when using some patch-based compression algorithm, it kind of suggests itself to test it with low-resolution, albeit still readable letters.

I am curious how Xerox is going to react and what will come out. Until then, thanks for spreading the word, please go on doing so – and of course, I am looking forward to getting further helpful emails!

[Ed. Note: After this posting, Mr. Kriesel had a follow-up call with Rick Dastin, Corporate Vice President Office and Solutions, and Francis Tse, Imaging System Architect at Xerox Corporation. His posting about it is here.]

Scans can’t be trusted as Xerox machines switch numbers around.

By Peter Bright from arstechnica.com:

Photocopiers exist to produce close enough replicas of original documents. Traditionally, they just spit out the result onto paper. Most copiers these days can operate as (generally rather large) scanners, generating PDFs, TIFFs, or other electronic representations. But some Xerox copiers have recently been found to produce scans that, well, aren’t that close to the originals at all. The copiers are producing documents that look superficially similar to the originals but switch around numbers apparently at random.

German computer scientist David Kriesel wrote about the problem last week [see my post, Xerox scanners/photocopiers randomly alter numbers in scanned documents (original report)]. He scanned some construction plans with a Xerox WorkCentre 7535 and noticed that the photocopier was resizing the rooms in his floorplans. One room annotated as being 21.11 square meters (roughly 277 square feet) got shrunk to 14.13 square meters (152 sq. ft.). So too did a room that should have been 17.42 square meters (187.5 sq. ft.). In both cases, the photocopier was taking the numbers from a third room—one that really should be 14.13 square meters—and using them for the other two rooms.

Kriesel currently speculates that this is an artifact of the compression being used. The scanned output can generally use any of several compression formats. One of these formats is called JBIG2. It’s designed for black-and-white (bitonal) images. The algorithm recognizes text-like portions of the image, which it then breaks down into a series of symbols (typically one symbol per character). The compressed image contains a sequence of symbols along with a dictionary to look up the shape each symbol represents.

It appears that the Xerox machines are somehow mixing up their symbols, perhaps judging two different characters to be so similar that they should be represented by the same symbol even when they should not.

Kriesel says he has received reports that, in addition to the two models of WorkCentre that he’s had issues with, other Xerox copiers show the same problem. The faulty scans can apparently be avoided by ensuring that JBIG2 compression isn’t used. Xerox has been notified of the errors but has not produced a fix yet.