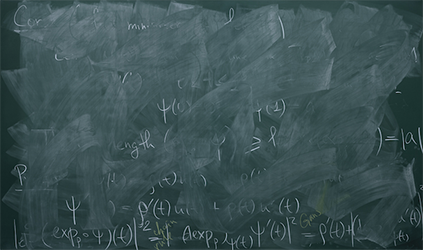 “Momentum,” displayed at the Wilmotte Gallery in London (Alejandro Guijarro)

Blackboards, the legend goes, were invented by a teacher. In the mid-19th century, James Pillans was headmaster of the Royal High School in Edinburgh, Scotland. Teaching geography, he found himself in need of a device that would allow him to share visual information with all his students, simultaneously — a more theatrical and efficient version of the slates students used to write their lessons at their desks. Pillans had chalk; he had tablets. Then he had an idea.

Today, in an age of dry-erase whiteboards and write-on wall paint — an age that has produced surfaces and markers that allow writings to be undone with the ruthless efficiency of a single swipe — blackboards have taken on the wistfulness of the outmoded technology. And the semi-erased chalkboard, in particular — its darkness swirled with the detritus of unknown decisions and revisions — compounds the nostalgia. Its spectral insights mingle in the bright dust of calcium carbonate.

Alejandro Guijarro sees that blurry beauty better than most. Over the last three years, the Spanish artist has visited some of the world’s most prestigious blackboards: the ones housed at the quantum mechanics labs of places like the University of Oxford, UC Berkeley, Stanford, CERN, Cambridge, and the Instituto de Física Corpuscular. At each place, he used a large-format camera to capture the markings left on the boards, just as he found them.

“The images in this series do not purport to be documents holding an objective truth,” Guijarro says of his work; “they function purely as suggestions. They are fragmented pieces of ideas, thoughts or explanations from which arises a level of randomness. They are an attempt to portray the space of a flat surface and of a given frame. They are arbitrary moments in the restless life of an object in constant motion.”
Some of Guijarro’s images are reproduced below.
END_OF_DOCUMENT_TOKEN_TO_BE_REPLACED