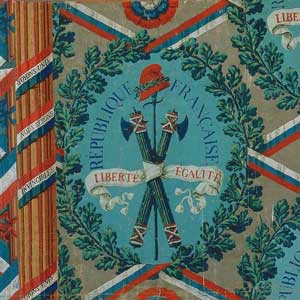 This is an example of wallpaper used as propaganda. This is a paper produced during the French Revolution, woodblock-printed ca. 1792. The citizens of France felt that the Revolution could not be won just by fighting in political circles or on the battlefield. They felt it needed to be reinforced on the domestic front as well and had to occur in the ordinary citizen’s everyday life. It was believed that symbols had a powerful effect on the spirit and could strengthen the validity of the new principles. The domestic nature of wallpaper as well its repetitive aspect made it an ideal medium for portraying such motifs, and bringing these ideals into the home. This paper contains numerous symbols of the Revolution including the red Phrygian cap, cockade, tri-color ribbons, and a banner with the words liberty and equality, which are all combined in this rather beautiful format. Unlike posters or flyers used today for the spread of information, these are block-printed wallpapers, made by some of the top French manufacturers. The Museum contains about a dozen different versions of wallpapers expressing this theme, in both sidewalls and borders, suggesting they were widely used and were being produced by a number of different manufacturers.