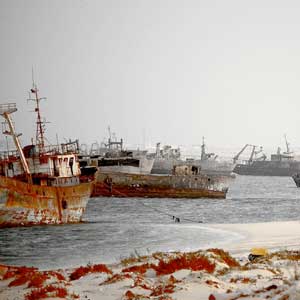 By Vincze Miklós from io9.com:
Where do boats go when they die? Sometimes they end up in vast ship graveyards, sometimes craggy, foggy places where ships have met their doom, and sometimes spots where ships are deliberately left to rust. There’s a quiet beauty to many of these graveyards and their resting inhabitants.

The port of Nouadhibou, Mauritania

More than 300 ships are resting in the world’s largest ship graveyard. The practice of abandoning ships here started in the 1980s after the country’s fishing industry was nationalized.

The former sea port city has lots of rusting ships, abandoned since the 1980s due to the recession of the Aral Sea, which is now at least 95 miles (150 km) away from the former harbor.

The area was named after the whale and seal bones that littered the shore because of the whaling industry, but there are more than a thousand ships caught by rocks and fog.

A dumping ground for disused and decommissioned ships in New York.

The graveyard for (mainly naval) vessels is a bend on the Aulne River, used by the French Navy.

The settlement was established in 1904 by a Norwegian sea captain as a whaling station for his fishing company. It was closed in December 1966, but the church is still used occasionally for marriages, and the whaling ships are still in the harbour.

(via Wikimedia Commons, by Liam Quinn, Serge Ouachée and Aah-Yeah/Flickr)

The world’s third largest ship breaking yard has a capacity of 125 ships of all sizes, including supertankers. In the 2009-2010 fiscal year, 107 ships were on the yard.

During the 1970s and 1980s, the ship breaking industry was on top, and Gadani was the largest breaking yard in the world.

A portion of the beach is littered with hundreds of rusted anchors.

(via StartTheDay and Ricardo Santos)

“At the end of World War II, Allied Occupation forces found hundreds of midget submarines built and building in Japan, including large numbers of the “Koryu” type. Many of these boats were in massed groups at shipyards and naval bases.”

(via Department of the Navy/Naval Historical Center)

Abandoned Ships Stranded in the Desert

Mo’ynoq was once a thriving port city on the Aral Sea in western Uzbekistan, famed for its fishing and canning industries. Today, most of… Read…

8 Abandoned Antarctic Whaling Stations and Bases that are Still Amazing

The Antarctic region has been home to numerous fishing villages, whaling stations, scientific bases, and way stations for exploration. Many of these… Read…