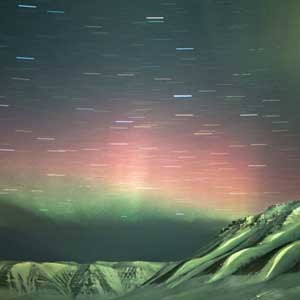 The imposing entrance to the Global Seed Vault. Aurora Borealis lights the sky above the Adventdalen valley. This eight-minute exposure reveals the nearly parallel motion of the stars, due to Svalbard’s proximity to the North Pole. The vehicles Wu and his compatriots used to get around. “Probably the closest I’ll ever get to riding an Imperial Speeder Bike on Hoth,” says Wu. The tracks of a polar bear, likely male. It is illegal to leave the borders of Longyearbyen without a gun for self-defense. The last picture Wu took at Svalbard – a Polaroid from the lounge of the most northerly airport in the world. The Noorderlicht, a ship that sails into the Tempelfjord every winter, where it allows the ice to form around it. While here, it is used as a base camp for expeditions. “I stayed outside and played with the huskies as everyone went inside for cookies and a hot drink,” says Wu. “I couldn’t stand the thought of going from ‘extreme outside’ to ‘extreme inside.'” The abandoned aerial transport station used to convey coal from the mines. While still an active coal mining site, Svalbard’s main industry is now tourism, and coal is transported in trucks. An aircraft fire simulator used by Longyearbyen Airport crews for practice. The ground is covered in several inches of ice. These antennae form part of the SOUSY Svalbard Radar, a weather monitoring facility. Spotted in waist-high snow on the way out of Longyearbyen.

Wu says of this image, “It was a lot colder than the photograph suggests. The Polaroids need to be dried and stored carefully after developing. Everyone else on the trip was shooting digital while I was struggling with light meters, loading film and storing prints in my jacket.” The frozen surface of Tempelfjord in Svalbard. An expired, 80 or less ISO Polaroid of the Northern Lights. The midday sun, still riding the horizon line, as seen from the summit of the terminal morraine of a glacier.

After an unsuccessful trip to witness the aurora borealis from the northern tip of Norway, photographer Reuben Wu decided to venture even further afield in search of the celestial light show. Choosing the remote, frozen island of Svalbard, Wu quickly made its strange environment the new focus of his time there.

“The northern lights ended up almost like a secondary thing,” he says. “I was resigned to the fact that they would just appear or they wouldn’t, and I wanted to see as much of this island as possible.”

With four different film cameras in tow, he developed his shots in the field and came back from the brutal, beautiful island with what look like postcards from another world.

Svalbard was ceded to Norway in 1920 and sits between the Barents and Greenland seas a little more than 800 miles from the North Pole. The arctic island is inhospitable, with average temperatures that range from -42.8 and 3.2 °F, and the ever-present risk of being mauled by a polar bear means any trip beyond camp is a heavily armed affair.

Conditions are harsh enough in Svalbard that the island’s largest town of Longyearbyen forbids dying: The town cemetery held its last burial some 70 years ago, when it became clear that the permafrost wasn’t allowing bodies to decompose. Bodies were so well preserved, in fact, that scientists in the late ’90s were able to recover genetic material from the virus behind the 1918 Spanish influenza epidemic that killed 40 million people.

“Someone from there told me it’s not a place for the weak,” says Wu. “You have to be strong as hell.“

The strange effects of living at such a high latitude are sometimes more subtle. For example, because the axis point of the Earth’s rotation is so close, long exposures reveal that stars near the horizon move across the sky in nearly straight lines. Wu was there in February, when the sun would rise just to the horizon around 10:30 in the morning, lazily drifting along the hilltops until about 5:30 in the evening, when it finally set.

“It messes with your idea of daytime,” says Wu. “It feels like golden hour all day.”

The series was shot entirely on film, but the images taken with Polaroid exhibit a special degree of distortion that attests to the island’s extremely forbidding environment. The vintage cameras and expired film add an otherworldly haze to the photos of already-strange sights.

“The way the Polaroid captures visuals is a lot more impressionistic, it’s kind of almost accidental,” says Wu. “I think about the pictures I take a lot, but the actual results almost look like they’re by chance.”

Traversing the island’s formidable landscapes was done mostly by snowmobile, making it a challenge to keep sensitive film cameras and the liquid in the film itself insulated from the elements. While traveling, Wu stored the gear under layers of clothes to keep them (mostly) warm enough to operate. The drastic temperature shift of going from a heated hut to frozen wasteland meant condensation could get in the way of any impulse to take a spontaneous photo. “I wanted to see how the film and the cameras would react to cold, and the answer was, not very well,” he says. “You can do as much research on the Internet as you want, but there are always going to be problems that present themselves to you, and some of them are going to be more serious than others.”

In a place like Svalbard, unexpected discoveries are bound to emerge from the mists, whether the remains of Soviet monuments or a wooden ship trapped in a frozen fjord, so being ready for the unexpected helps. Some you can count on, like the Global Seed Vault (or the Doomsday Seed Vault, if you prefer), an ominous food backup project near Longyearbyen that counts the Rockefellers, Bill Gates, and GMO giant Monsanto among its investors. Marked by a blast-proof, jutting concrete gate, the abandoned mine-cum-bunker houses millions of copies of seeds from the world’s crops. On the way back from photographing the vault’s entrance way and paneled artwork (which Wu describes as looking like a church from another planet), the group noticed what looked like a red airplane stuck to the side of a mountain. Deciding to venture over to the strange site, they soon discovered that it wasn’t a plane, but a mock-up, a training tool that is set ablaze for firefighters to practice dousing aircraft fires. “It’s quite refreshing to find things you have no ideas about,” says Wu. “You start thinking, what is the story behind this, who built it, what is it for, when is it from?”