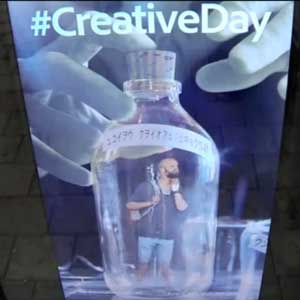 By Charlie White from Mashable.com:

Take a look at the priceless reactions of these people who are secretly photographed while waiting for a bus, and then Photoshopped into amusing positions and implied relationships. It’s part of a “street retouch” stunt by Adobe, featuring quick-draw Photoshop master Erik Johansson.

We especially liked the way people’s “street faces” turned to soft smiles and delight as soon as they realized what was going on.

This Photoshop trick, reminding us of both Candid Camera and Mission: Impossible, took place in Stockholm, Sweden as part of a promotion for Adobe Creative Days, to be presented live online beginning June 11.

Once you learn the basics of Photoshop, you can put together convincing composites rather quickly. This is a great demo of that, albeit done by an accomplished Photoshop magician.

Adobe’s goal here was obviously to highlight Photoshop’s magic, but if its stellar PR people are trying to convince me of the tremendous power of Photoshop — which I think is the best piece of software ever written — they’re preaching to the choir.

Which one of these Photoshop-enhanced scenarios was your favorite?

Update: The location of this video was originally stated to be Finland, but it was actually shot in Stockholm, Sweden. Thanks to Michael Edlund and Viktor Bergman for the correct info — I’ve updated the text. – CW