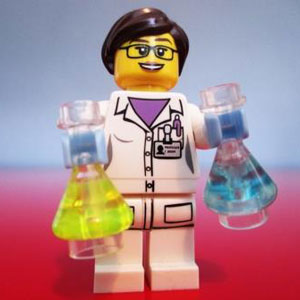 By Maia Weinstock from scientificamerican.com:

It’s 11:47 am on the Sunday before Labor Day, and I’m staking out a LEGO store inside a Byzantine shopping mall on the outskirts of Boston. I am here with a coterie of children and parents, the lot of us waiting impatiently while three LEGO associates in black shirts and khakis make their last-minute preparations before the onslaught begins.

At precisely noon, a silver-haired woman approaches the glass door and welcomes us inside. The subsequent scene plays out like an invasion at the Wonka factory: Screaming kids make bee lines for their favorite LEGO sets and the store’s open brick piles, while parents follow along behind, readying their wallets. Meanwhile, I stroll purposefully toward the very back of the store. There, on a corner shelf just about floor level (strategically placed so three-year-olds can reach it, no doubt), I locate my target: dozens of shiny plastic packets, each containing one of 16 new models of LEGO people, better known as minifigures.

Today is release day for Minifigure Series 11, and I am here for the Scientist.

Finding her will take a bit of doing, but I’ve done my homework. Each of the Kelly green pouches looks the same, so most customers will simply grope the bags and try to guess which fig lurks inside. Thanks to advanced scouting from fellow adult fans of LEGO, however, I know precisely what to feel for—two tiny Erlenmeyer flasks—as well as what hidden code to look for on the backs of the packages.

As luck would have it, the very first pouch I pick up appears to be the one I’m after, but to be sure, I rummage a bit. I let out a chuckle when two small children run toward me, yelling in unison, “Series 11! Series 11! Series 11!” I make way and let them at it. After a short wait at the checkout counter, I rip open my polybag. Success! I’m the proud owner of the new scientist minifig, the first of her kind. She has been a long time coming.

A Brief History of STEM Minifigs

The advent of minifigures as unique, standalone characters is a relatively new development in the world of LEGO, and today’s figs are a far cry from the little yellow characters that my generation grew up playing with in the 1980s. Our space explorers, knights, and policemen wore very simple clothing and had nothing more than two dots and a curved smile for a face. Female minifigures, which appeared two months after the initial minifig launch in 1978, were identified mainly by their long hair. Caucasian and brown skin showed up in later decades, but the original yellow figs were supposed to cross racial lines.

Over the years, LEGO has had many opportunities to showcase minifigs as professionals in the STEM fields. The company’s first themes, around which multiple sets are built, were Space, Town, and Castle. These debuted at the same time as the first minifigs, in 1978. Castle doesn’t really do scientists, probably since its medieval residents live in the days of astrology and alchemy. Space is a science fiction realm. It has traditionally been filled with futuristic astronauts, rocket scientists, and other engineers—but very few females. It wasn’t until 1993 that the first female minifig appeared in a Space set. She was an astronaut in the Ice Planet 2002 series, which depicted scientists working on the fictional planet Krysto.

Town—which became City in 2005—features minifigs in everyday life, quite often in jobs requiring STEM skills. These have included doctors, EMTs, engineers, astronauts and space scientists. Males have dominated such roles, but a number of females have appeared here as well. In fact, the very first female minifig was a Town doctor.

More recent themes, including those for licensed sets and the collectible minifig series, have featured some STEM professionals. Again, though, most of these have been male and, in several cases, dripping with stereotypes. I cringed when I first saw the Computer Programmer, which debuted just last year. His nerdy attire, including bow tie and broken glasses, harkens back to an era and style that rendered programmers completely uncool. Then there’s the recent wild-gray-haired Crazy Scientist, one of my least favorite STEM stereotypes. This is actually the second mad scientist that LEGO has released; the first wore a lab coat, a stethoscope, and a patently diabolical face.

As for females in more recent themes, they are few and far between. One collectible minifig is a surgeon, complete with mask, syringe, and X-ray slide. If you consider wild animal care a branch of science, then you can include the Zookeeper among LEGO’s STEM professionals. Several generic female “scientists” were also released as part of the FIRST LEGO League, but they and their male partners were scientists in name only; their clothes had no markings, nor did they carry any scientific instruments.

At this point I should mention that the gender gap at LEGO goes well beyond minifigs in STEM. I’ve written previously about the company’s gender problem, which received much media attention after the 2012 release of the girl-focused Friends theme. For a visual primer on this issue, I highly recommend Anita Sarkeesian’s powerful two-part video about the “LEGO Boys Club.” For more historical perspective, David Pickett does a wonderful job in his multi-part blog series deconstructing the LEGO gender gap. I also put together a colorful infographic displaying gender in LEGO heads. During my investigation, I found that the ratio of all-time minifigure models is roughly 4:1 in favor of males. And the female characters LEGO has produced are often laden with stereotypes. A quick glance at some typical female minifig torsos suggests that girls/women are predominantly into pink, hearts, and excess skin.

I would be remiss if I didn’t acknowledge that, of course, toys are meant for fun, and fantasy is a routine and expected aspect of play. I just find that when toy companies offer up humans or human-like characters, there is an opportunity for inspiration that often goes wasted. The unfortunate reality is that time and again, toy manufacturers resort to gender stereotypes to hawk their wares. Some, including LEGO, have claimed that they only follow such practices because this is what their customers will buy. To the extent that companies are in business solely to make money, that line of thinking of course makes sense. But what do excessive stereotypes teach our children about future expectations for themselves and for their interactions with others?

Toys like the now-infamous “Math class is tough!” Barbie sometimes cross a line that turns parents into activists. That particular Barbie was discontinued after public outrage went viral. But most of the time, gender bias in toys is more subtle, and we’ve generally learned to accept it. When Mattel released a computer engineer Barbie back in 2010, there seemed to me almost as much grumbling on social media channels about the fact that she was outfitted in pink pumps and pastels as there was applause for her astereotypical career. But that grumbling was stifled. At least they made the doll at all, we either thought to ourselves or were told by others, so let’s not argue about the color of her laptop.

The same thing happened when LEGO Friends sets appeared last year showing female figures—which are deliberately distinct from minifigures—hanging out in an invention workshop and taking care of animals at a veterinary clinic. It’s wonderful that these are STEM-related activities, but do they really have to be bathed in pink, purple, and periwinkle? This is not only a question of color preference. When toys are created in such colors, it’s that much less likely that boys will want to have anything to do with them. There are no veterinarian offices or maker-style workshops in other LEGO sets. But if a boy is interested in these Friends scenes, he’s likely to be mocked for wanting to build “girl stuff.”

Even toys that are specifically meant to celebrate cerebral pursuits have tended to exhibit gender bias. For instance, the Unemployed Philosophers Guild’s popular series of plush dolls and finger puppets features about 50 historical characters in its Little Thinkers line. 10 are female. Of the company’s 14 doll and puppet characters that are modeled after scientists, a grand total of two are women.

It is with this history in mind that today’s release of the Scientist minifig—Professor C. Bodin, according to her ID tag—seems so significant. She is the first female lab scientist in LEGO minifig form, although her specialty is deliberately vague. She might look like a chemist, but reading her official bio, one gets the sense she could equally be a biologist, biophysicist, materials engineer, theoretical physicist, or roboticist:

“The brilliant Scientist’s specialty is finding new and interesting ways to combine things together. She’ll spend all night in her lab analyzing how to connect bricks of different sizes and shapes (she won the coveted Nobrick Prize for her discovery of the theoretical System/DUPLO® Interface!), or how to mix two colors in one element. Thanks to the Scientist’s tireless research, Minifigures that have misplaced their legs can now attach new pieces to let them swim like fish, slither like snakes, and stomp around like robots. Her studies of a certain outer dimension have even perfected a method for swapping body parts at will!”

Let us hope that this is only the beginning. Earlier this year, a geochemist by the name of Alatriel proposed an entire set of female minifigs participating in science and other intellectual pursuits as part of CUUSOO, a LEGO-sanctioned crowdsourcing project. Her set received more than 10,000 votes on the CUUSOO website, which means it will officially be considered for creation by the team in Billund. I look forward to the day when I will once again make the trek out to a crowded LEGO store, just in time to witness kids shouting with excitement for the brand new toys that give girls and women a more prominent place in the LEGO universe.

Images: Top photo by author, the two mashups made by author from images collected over time at The LEGO parts depot Bricklink.com and a LEGO wiki called Brickipedia. 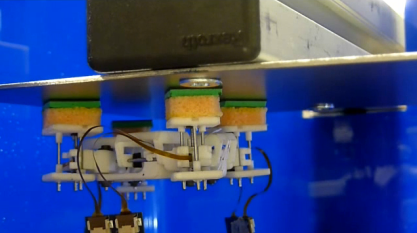 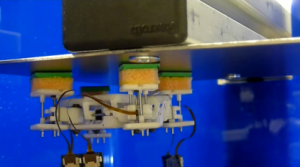 By Jason Bittel from Slate.com:

From the chest-burster in Alien to the bellybutton bot in The Matrix, most of us are a wee bit squeamish about the whole thing-crawling-around-inside-you experience. And if thoughts of parasites playing poker in your body cavity already keep you up at night, this article probably isn’t for you—because scientists are working on a robot that can walk around inside your gut like a tree frog on a wet leaf.

Not just for fun, of course. (You’ll have to pay extra for that.) Modern surgery techniques allow doctors to perform complex tasks with the smallest of incisions, reducing pain and recovery times. However, there are obvious drawbacks to these techniques—namely visibility. That’s why researchers at the University of Leeds are working on a robot small enough to enter the body through the same hole used for laparoscopic surgeries. The robot would be the surgeons’ man on the inside—a crawling camera used to guide other instruments.

Obviously, getting a robot to walk upside down on the abdominal wall isn’t the easiest task in the world. So researchers have once again looked to nature for inspiration.