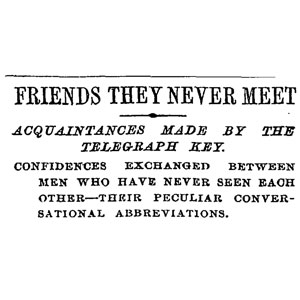 I’m trying something new today. Sometimes in my research I find an interesting old article that I wouldn’t normally post because it’s not from the Sunday Magazine section, or it’s from further than 100 years ago so I’ll never get to it. Instead of letting these go unused, I figure I’ll occasionally post them midweek during what would otherwise be slow weeks. Since this weekend I only have three articles to post, it seems like a good week to try it.

From November 30, 1890 (a Sunday, although not in the Magazine Section)

FRIENDS THEY NEVER MEET: ACQUAINTANCES MADE BY THE TELEGRAPH KEY. CONFIDENCES EXCHANGED BETWEEN MEN WHO HAVE NEVER SEEN EACH OTHER — THEIR PECULIAR CONVERSATION ABBREVIATIONS (PDF)

Telegraph operators on opposite sides of the country had some time to get to know each other when they weren’t busy sending other people’s messages. “Metaphorically they shake hands cordially twice a day — when they begin work and when they end it. And when business is dull they hold long conversations, with hundreds of miles — perhaps thousands — separating them, as two friends might do over a dinner table.”

In their conversations telegraphers use a system of abbreviations which enables them to say considerably more in a certain period of time then they otherwise could. Their morning greeting to a friend in a distant city is usually “g. m.,” and the farewell for the evening, “g. n.,” the letters of course standing for good morning and good night. The salutation may be accompanied by an inquiry by one as to the health of the other, which would be expressed thus: “Hw r u ts mng?” And the answer would be: “I’m pty wl; hw r u?” or “I’m nt flg vy wl; fraid I’ve gt t mlaria.”

By the time these courtesies have taken place some early messages have come from the receiving department or from some other wire, and the man before whom they are placed says to his friend many miles away: “Wl hrs a fu; Gol hang ts everlastin grind. I wish I ws rich.” And the other man says: “No rest fo t wickd, min pen,” the last two words indicating that he wants the sender to wait a minute while he adjusts and tests his pen. Presently he clicks out “g a,” meaning “go ahead,” and the day’s work has begun.

I’m not sure what “Wl hrs a fu” is supposed to mean. But it sounds like “min pen” is an 1890 equivalent of today’s instant messager’s “afk brb.”

A couple months ago (in this blog) but actually 20 years later (in real time), the New York Times Sunday Magazine ran an article explaining that these conversations between telegraph operators were how jokes went viral in 1910. So surely there must have been a telegraph equivalent of LOL or ROFL, right?

Operators laugh over a wire, or rather, they convey the fact that they are amused. They do this by telegraphing “ha, ha.” Very great amusement is indicated by sending “ha” slowly and repeating it several times, and a smile is expressed by sending “ha” once or perhaps twice. Transmitting it slowly and repeating it tells the perpetrator of the joke at the other end of the wire that the listener is leaning back in his chair and laughing long and heartily.

So it looks like “ha” was the “LOL” of 1890. And it makes sense, when you consider how easy it is to telegraph “ha” compared to “LOL” or “ROFL” in Morse Code. “Ha” has a nice rhythm to it. Try tapping them out on your desk and see for yourself:

I was also fascinated to discover that telegraph operators learned to identify each other by how the dots and dashes were transmitted across the wire, and could even distinguish a male operator from a female:

No two operators send alike. The click of the instrument is always the same to the ear of a man who does not understand it, but one operator recognizes the sending of another if he has ever heard it before for any length of time, just as a familiar face is recognized. Operator “Tommy” Snaggs leaves New-York, and, after roaming from one city to another, finally lands in the Galveston (Texas) office and goes to work. He is put down to work a wire running to Kansas City. The man in Kansas City begins to send. Mr. Snaggs pricks up his ears and interrupts the sender. “Ain’t tt u Billy Robinson?” he asks, and the other man says, “Yes, tts me, & ur ole Tommy Snaggs.” Mr. Snaggs returns, “tts wo I am, I thot I reconized ur sendin.” Then they devote a few moments to telling of their travels. The last time they worked on the same wire one was in Boston and the other in Montreal.

It is a peculiar fact also that an experienced operator can almost invariably distinguish a woman’s sending from a man’s. There is nearly always some peculiarity about a woman’s style of transmission. it is not necessarily a fault. Many women send very clearly and make their dots and dashes precisely as they were intended to be made. It is impossible to describe the peculiarity, but there is no doubt of its existence. Nearly all women have a habit of rattling off a lot of meaningless dots before they say anything. But some men do that too. A woman’s touch is lighter than a man’s, and her dots and dashes will not carry so well on a very long circuit. That is presumably the reason why in all large offices the women are usually assigned to work the wires running to various parts of the cities.

When two operators fight across the telegraph, it’s called a “fight circuit” and it’s pretty futile because it’s impossible for two operators tapping at once to tell what the other is saying. The article tells a humorous old story of one operator who set up a rudimentary chat bot to fight for him (possibly passing the Turing test 22 years before Alan Turing was even born):

They fought for some time. Neither would yield. The man at Albany, who was old and astute, saw that the man at Syracuse, who was young and stubborn, was in for an all-night struggle. The Albany man looked around for a proxy. He found it in the clock wire, which was a wire attached to the clock’s pendulum, the swaying of which acted to open and close the circuit. He connected the Syracuse wire with the clock wire and went home to bed, leaving the Syracuse man valorously battling with the tick-tick, tick-tick of the clock. The old story concludes with the veracious statement that when the Albany man reached the office the next morning he heard the Syracuse man still fighting the clock, and that when the former disconnected the clock wire and closed the circuit the latter snapped out triumphantly, “I downed you at last, did I?”