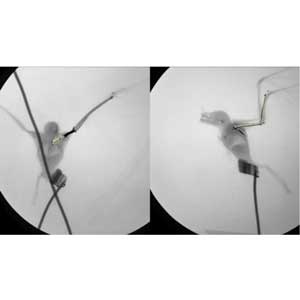 By Megan Garber from Mashable.com:

It’s unlikely, though, that if you’ve seen a bat, you spotted it in the act of takeoff. Which means that you probably haven’t seen a bat in the middle of an activity that has long perplexed biologists. Bats may be the only mammals capable of true, sustained flight, but how, exactly, do they get to flying in the first place?

The team looked in particular at Seba’s short-tailed bats — fruit bats — X-raying the creatures as they lifted themselves off the ground. Analyzing the videos that resulted, the researchers made a discovery: Bats seem to take off into the air by stretching out the tendons that anchor their bicep and tricep muscles to their bones. They then compress the tendons to release energy and power their flight upward.

It seems, in other words, that bats’ stretchy bicep and tricep tendons are crucial for storing and releasing the energy the creatures require for takeoff. As research lead Nicolai Konow explained it:

By combining information about skeletal movement with information about muscle mechanics, we found that the biceps and triceps tendons of small fruitbats are stretched and store energy as the bat launches from the ground and flies vertically.

The bats’ stretchy muscle analysis seemed to be confirmed by the team’s use of another technology: fluoromicrometry, in which small, chemically labeled markers are implanted directly into muscle — which in turn allows researchers to measure changes in muscle length during contractions with high precision.

And that’s a big finding. Most scientists had previously believed, Smithsonian Magazine points out, that small mammals’ tendons are too stiff, and too thick, to be stretched at all. The X-rays revealed otherwise, however, and the Brown team presented their findings last week at a meeting of the Society for Experimental Biology. And they’ve presented their videos to the rest of us, so that we may be appropriately astounded and creeped out by the unique biology of bats.

This article was originally published at The Atlantic here.