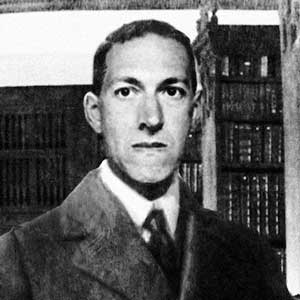 By Eric Grundhauser from AtlasObscura.com:

Down a dark alley, at the corner of your eye something flickers, probably a trick of the waning light, or a stranger up to some banal task. But what hubris leads you to believe that you can understand what happens in and among these haunted buildings much less this ancient world?  You may have passed down this very street, past this very spot a hundred times and thought it familiar, until today when the light and the time were just right, and this simple alleyway became alien, unknown. Like glimpsing an older, stranger reality existing just beneath our own, but no less terrifyingly real.

Such was the outlook of horror fiction trailblazer Howard Phillips Lovecraft. Born in 1890, Lovecraft took inspiration from his historic New England surroundings and beyond to create tales of otherworldly standing stones, hidden cities older than time, and simple homes that exude unknowable evil. Lovecraft’s prose placed a distinct emphasis on the power and mystery of location, taking time in each of his stories to create a rich sense of place where his otherworldly gods and tentacled horrors could thrive, sending both his characters and his readers into madness.

Turn out the lights, pray to your dead gods, and join us while we risk insanity to bring you a list of the real world locations both horrible and mundane, that inspired some of Lovecraft’s most famous works. Cthulhu Fhtagn!

“…sprawling on a flight of stone steps so prodigiously worn that it was little more than an inclined plane at the centre, was a ghastly array of human or semi-human bones. Those which retained their collocation as skeletons showed attitudes of panic fear, and over all were the marks of rodent gnawing.” – H.P. Lovecraft, ‘The Rats in the Walls’ (1924) Rats in the walls (via sewerhistory.org)

While many of Lovecraft’s stories take place in his shadowy mirror of New England, he also found inspiration in locations farther afield, but no less steeped in hidden history.

One such example is his story The Rats in the Walls (1924) which takes place in an ancient English priory. The tale concerns a character named Delapore as he returns to his family’s ancestral home and discovers a hidden city of untold age beneath the estate, and a history of cannibalism which eventually overtakes him. Lovecraft’s description of Delapore’s (the name deriving from “de la Pour,” an actual Irish baronage) sinister estate and its subterranean secrets share many similarities with a contemporary account of the real life holy site, St. Patrick’s Purgatory.

Founded in the 15th century, St. Patrick’s Purgatory is said to be the location where St. Patrick discovered a gateway to hell, and was shown terrible visions of its punishments. Encompassing the lake-bound Station Island, the resulting church grounds maintained the worship and upkeep of the site for thousands of years, and it continues to be a popular pilgrimage site to this day. Most of the buildings still recall the Middle Age stone architecture established in the 15th century, especially the ornate basilica crowning the island. The site also includes such unique features as a labyrinth, gendered dorms, and even a small shop. While Lovecraft probably did not visit the site himself, his contemporaries’ descriptions of crumbling rectories over an ancient gate of pure evil can be felt throughout the Delapores’ rat-infested nether-city.

St. Patrick’s Basilica is the largest building on the island. (via Panaramio)

These divots are allegedly the site of the portal to hell shown to St. Patrick. (via Following the Shepherd’s Voice)

The labyrinth on Station Island. (via The Good Retreat Guide)

“God, how that man could paint! There was a study called ‘Subway Accident,’ in which a flock of the vile things were clambering up from some unknown catacomb through a crack in the floor of the Boston Street subway and attacking a crowd of people on the platform. Another showed a dance on Copp’s Hill among the tombs with the background of today.”– H.P. Lovecraft, ‘Pickman’s Model’ (1927)