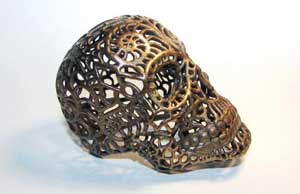 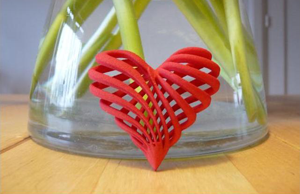 I ordered this skull and heart from Shapeways.com, a well-known 3D printing service. The 4-inch-high skull is heavy and beautiful (the heart hasn’t arrived yet). You can choose from many items with 3D patterns already uploaded, or upload your own. Some items are available only in the white plastic discussed below, and others in several other materials such as metals and ceramics. Both of mine are in stainless steel. I’m planning to learn some 3D modeling software and design my own holiday gifts this year.

By Charles Arthur from The Guardian:

Jonathan Rowley reaches into the basin of white powder and like a magician pulls out the frame of a pair of spectacles. Made of plastic, they’re the same white as the powder, but hard, and unusually shaped.

Designed by Ron Arad for PQ Eyewear, each hinge on the glasses consists of segments like an armadillo’s tail. “We made these here,” Rowley says, indicating a hulking white machine behind him, which looks like a cross between a dry cleaning apparatus and an industrial oven. “The thing is, you couldn’t make these any other way,” he says.

3D printing starts by designing objects on a computer and then printing them with thermoplastics (and in this case, lasers) in super-thin layers to create intricate finished objects.

Having got its start in making prototypes for aerospace and automotive companies, and latterly for surgeons looking to make precisely tailored replacements for bones, 3D printing is now blossoming.

The technology has been used to make everything from jewellery to replacement jawbones, but the question is, how big is 3D printing going to get? The estimates vary, but it’s always in the billions. Terry Wohlers, an analyst who has followed the field for years, argued last September that the technology has hit its “tipping point” and is about to expand into wider usage we’ll see every day.