By Tom Vanderbilt from a February 2004 article on Slate.com:

Courier, Dispatched: How the Federal Government—more specifically, U.S. State Department—put the kibosh on the typewriter font.

In late January [2004], an announcement from the U.S. State Department generated certain chatter along the generally indiscernible diplomatic-typographic axis. This was the news that as of February 1, the department was ditching Courier New 12 as its official font-in-residence and taking up with Times New Roman 14. Courier 12 had been put to pasture after several decades of honorable service, like an aging, elegant diplomat whose crisp, cream-colored linen suit and genteel demeanor now seem winningly old-fashioned. Times New Roman 14, as the State Department put it, “takes up almost exactly the same area on the page as Courier New 12, while offering a crisper, cleaner, more modern look.”

END_OF_DOCUMENT_TOKEN_TO_BE_REPLACED 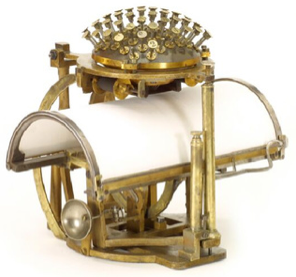 By Adrian Covert from Gizmodo.com — check the Comments for more pictures of typewriters:

Typewriters are intricate machines—complex little boxes that require an abundance of ingenuity to produce. They are often beautiful, and they occasionally find wildly imaginative ways to conduct the delicate dance between the hammers and the keys.

So much of the way we interact with machines today—QWERTY keyboard, hello!—directly links to the innovations pushed forth by typewriters in the late 19th century. In fact, it’s hard chart the progression of technology without considering the typewriter. So here’s a look at 10 of our favorite typewriter designs of all time.

Manufactured beginning in 1873, the Scholes and Glidden Typewriter was the first mass-produced typewriter to find commercial success. If you ever want to know the names of the men responsible for forcing you to learn the QWERTY Keyboard, look no further than Christopher Latham Sholes and Carlos S. Glidden. [IMAGE]

The Crandall New Model, which first appeared in 1885, is great because it’s like a typewriter skeleton. Nothing more than what needs to be there. Just pure, unadulterated machinery. [IMAGE]

The Mignon typewriters were some of the world’s first electric typewriters. These used an 84-character index map, with an electric indicator needle that would tell the typewriter how the type cylinder should be positioned. A print key could execute the command. The Mignon 4 from 1923, pictured, happened to be the prettiest of the 6 models made. [IMAGE]

The Hermes 3000 is nothing short of iconic. Introduced in the 1950s, its curvy lines and top-notch typing comfort made it a favorite of typists for decades. Even today, few typewriters are looked upon so fondly. [IMAGE]

While the Scholes and Glidden typewriter came first, it’s the Underwood No. 5 that set the standard all other typewriters would follow after 1900. Legendary due to sheer quantity alone, the Underwood was the favorite of professionals everywhere in the first half of the 20th century. [IMAGE]

Arguably the weirdest of all typewriter designs, the Hansen Writing Ball first appeared in 1865. It required typists to hover over its top-mounted keyboard and peck down onto the paper below, which was stretched over an arched frame. The most famous Writing Ball owner? Friedrich Nietzsche. [IMAGE]

The Lettera 10 typewriter isn’t necessarily flashy, but the combination of curved surfaces, sharp angles, and a generally minimal approach make this typewriter seem the most sci-fi influenced of them all. [IMAGE]

First produced in 1880, the Hammond 1880 typewriter instantly grabs your eye with its flat, rounded body. It also happens to have a smiling face, hiding in plain sight. [IMAGE]

The Simplex, with it’s disc-cum-keyboard, was first introduced as a serious typewriter, but quickly evolved into a “toy” for kids. Rotate, depress, rotate again. Great fun! You know, if your idea of fun at the turn of the century was typing out dictionary entries or something.

If the clean lines of the 1970 Olivetti Valentine typewriter don’t do it for you, then maybe you’ll get a kick out of the keys, which look like they’re being spewed forth from an open mouth. [IMAGE]

[Full article — check the Comments for more pictures of typewriters]