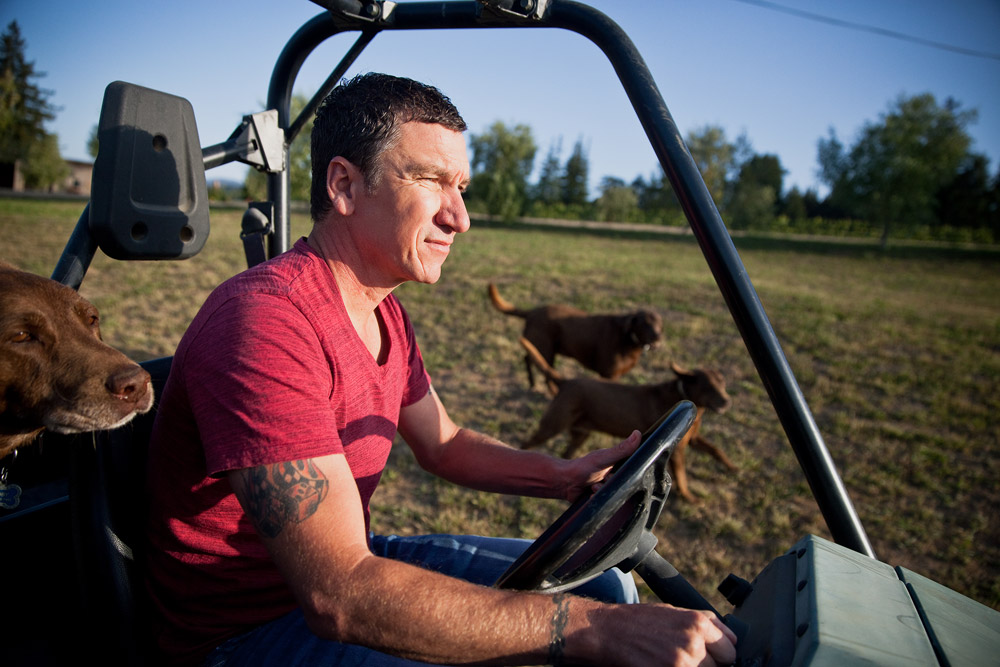 By Beth Carter from Wired.com:

Robert Egger crests a hill in the Santa Cruz Mountains, and a spectacular view of his 50-acre ranch overlooking Monterey Bay fills the windshield of his pickup. He and his wife made everything you see, from the Mediterranean-style adobe house to the hand-cut stone barn to the huge iron gate through which three chocolate labs burst forth. They planted the olive trees, tiled the floors, and even built the muscle car in the garage.

Egger likes to make things. He always has. And the things he most likes to make are bicycles. When he was in second grade, he was asked about his dreams for the future. “I want to have a bicycle shop and a cat farm,” he wrote.

Egger is 51 now, and he still hasn’t started that farm — though he’s got five cats — but he not only opened a bike shop, he helped shape the industry. As the creative director of Specialized Bicycles, one of the world’s largest bicycle manufacturers, Egger has had a hand in some of the biggest innovations in bicycle design.

“What Robert has brought is really a great sense of design and design language and also to make products that are viscerally appealing to people, that you really want to lust after,” said Mike Sinyard, founder and CEO of Specialized. “And if you look at what Robert has done in the industry, Robert’s a game-changer. Other people talk about designs, and while people are talking, Robert executes.”

In an age of specialization, Egger is a rare Renaissance man: an artist, builder, creator, innovator, misfit and prankster. He’s happiest when he’s pushing boundaries — and buttons. He’s outgoing, maybe even a bit arrogant, and brimming with confidence. He’s the seventh son of a seventh son, a talented and deeply competitive man. But most of all, he is a man who loves bicycles. He loves riding them and he loves building them, and he has dedicated his career to spreading that love.

He’s been a maker since childhood, because he had to be. He was the youngest of 10 brothers and sisters raised on a farm in Marshfield, Wisconsin. Hand-me-downs were a fact of life, so if he wanted something all his own, he had to make it.

It started with a bicycle.

Egger was 4 and coveted the gorgeous red Schwinn, with its chrome handlebars and streamers, the kid next door flaunted.

“He’d ride by the farm and just give me the eyeball,” Egger said, his tone suggesting that wound hasn’t quite healed. “I wanted to beat that kid up and steal his bike. I wanted it more than anything.”

One day his father rolled up in his pickup, the bed stacked full of rusty bicycles and parts he’d found at the junkyard.

“He gave me a pliers, a crescent wrench and a hammer, and said, ‘Go build your own bike,’” Egger said.

He’s been at it ever since. For Egger, bicycles represented freedom, an escape from the farm to experience new things. Perhaps it is no mistake that his initials are “FRE” — Francis Robert Egger.

That obsession consumed him, leading him to earn a degree in industrial design from the University of Wisconsin-Stout in 1984. Every project involved bicycles, even after his professor dismissively said they held no future. When Trek offered him a job as designer and chief product tester after graduation, Egger grabbed the opportunity, if only to spite his professors.

Spite, and his hyper-competitive nature, also led him to racing. While in college, Egger often hit the road on an old touring bike, exploring the countryside with the bike club. One day, the school’s race team whizzed passed with their matching wool jerseys and high-end bikes. Egger upped his pace and caught the peloton. “Hi guys,” he said. “I’m Robert.”

The riders turned up their noses, increased their pace and tried to drop him. Egger matched, then exceeded, their pace. One by one, they fell behind. That got their attention. He was soon on the team, winning races and setting a record for the time trial in 1985.

He became known as “The Wisconsin Strongman” because of his monstrous legs. His personality was no smaller. He’d don black Doc Martin boots and designer jeans and wear his hair shaved on the side, leaving a curly tuft at the top. It looked a bit like a pineapple.

“I wouldn’t have been caught dead wearing that,” said Bob Mionske, his friend and teammate at the time. “But what I noticed was that four to five years later, that was the style. He was on the cutting edge of saying, ‘I’m going to do things different.’ His equipment and his look was fearless.”

He and Mionske were invited to the Olympic Training Center in 1986, so they went to California with barely $20 between them. It wasn’t what Egger expected. He didn’t fit in, he didn’t have the money the other guys had and he found he wasn’t interested in playing the game.

“Looking now at all the Lance [Armstrong] stuff, you can’t get into that sport and not be a part of the whole drug thing,” Egger said. “That’s the culture, and I think I subconsciously saw that at the training center.”

After leaving competition, Egger spent a year at Blackburn Design, where he worked on a stationary bicycle and a bike repair stand. It was a cool enough job, but Egger wanted to do his own thing and left in 1986 to launch a design firm. He worked in a bike shop in Los Gatos, California to pay the bills.

That’s where he met Mike Sinyard, the founder and CEO of Specialized, which was much smaller back then. Egger didn’t know Sinyard — though he knew of him, having heard he was a ruthless but respected businessman — and had no idea who he was talking to when Sinyard asked about various products.

“What do you think of these Specialized bags?” Sinyard asked.

Egger, thinking this guy was new to cycling and looking for advice, was honest. “These are the worst bags in the world,” he said. That’s when Sinyard identified himself. Egger was horrified, and convinced he’d lost his job. Instead, Sinyard pressed the matter, so Egger explained why they sucked and said he could make something better.

“Well, why don’t you make some bags, and if they’re any good I’ll pay you for the design,” Sinyard recalls saying at the time.

Egger accepted the challenge. The following Monday, he rode to Specialized with the bags. Sinyard loved them — they were innovative, they were different and they worked. He hired Egger on the spot to work on a project-to-project basis fixing everything he’d criticized during Sinyard’s visit to that bike shop.

A quarter-century later, they’re still at it. Egger’s worked on some of Specialized’s most revered bikes — the world-famous Stumpjumper, the FSR, the Tarmac and the S Works brand, to name a few — and brought some soul to the company and its products. Over the years he has strived to design things that are more than fast, but also emotional and fun.

Egger believes there’s no perfect design, and nothing is ever truly “done.” He tries to learn something new with every project, and “try to inject a huge dose of innovation.” Form does not take precedence over function in his view, form is function. He sees “beauty through innovation” in the way frame tubes are shaped, or the way the vents in a helmet draw cool air in and hot air out.

He also has brought a sense of fun — whimsy, even — to Specialized. The company’s HQ in Morgan Hill, California brims with his flights of fancy. An adult-sized Big Wheel. An off-road unicycle called “Unipsycho.” A modern pennyfarthing, a snowboard bike and all manner of beach cruisers and townies.

This mixture of the serious and the silly defines Egger’s personality. He lives for pranks, and loves nudging people just beyond their comfort zone. His youthful spirit, relentless drive and design sense define his work at Specialized.

“Robert was making commentaries on the day,” said Gary Fisher, one of the godfathers of mountain biking and an accomplished designer in his own right. “He’s almost like a political cartoonist. He made statements and impacts.”

Egger also has an exceptional gift for pranks. Like, say, filling a young designer’s new car with pallet after pallet of water bottles. Or mischievously moving coworkers’ cars if they’re foolish enough to leave their keys lying around. He’s been known to brandish a blowtorch in board meetings, and he keeps a hammer handy to smash prototypes that don’t quite work.

He’s an equally unconventional designer. He doesn’t own a sketchbook. He conceptualizes a design in his head, then builds it. He’ll quickly mock up a prototype, put it on a conference table and get people talking. What works? What doesn’t? How can it be improved? What should be added and, no less important, taken away? Egger believes his most important role is to create an environment in which people can experiment. Failure is part of the process.

He strives to make things fun, sexy and practical, but most importantly, he wants to make things that incite emotional attachment. He wants people who own a Specialized to love it, and those who don’t to wish they did. He wants everything he designs to convey passion for the sport.

Egger doesn’t buy anything if he can build it, an ethos he shares with his wife of 15 years. Together they’ve built motorcycles, cars and just about everything you see on their vast estate. You get the sense that if he didn’t have the income to do this, he’d be scouring junkyards to cobble things together. His tidy workshop overflows with bicycles and motorcycles in various states of completion, a BMW 2002 he is restoring and scale models of the house.

That’s a good metaphor for Egger: a man greater than the sum of his parts, always looking ahead to the next project, whether it’s cutting the stones that will one day be a wall on his property or designing the next bike you’ll see crossing a finish line somewhere.

“It’s about being on topic,” said Fisher. “You either are riding the wave, getting pounded by it or miss it all together. Robert is out there surfing it and getting the fantasy out there. I’m thankful that the industry keeps guys like Robert around.”

Robert Egger’s most favorite designs of all time