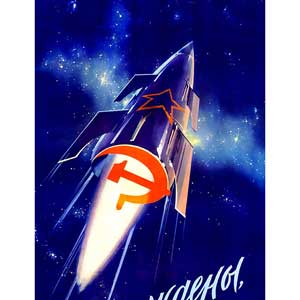 The twentieth century Soviet space program will always be remembered as one of the greatest in the world. And these posters reveal that it also came with one of the world’s most beautifully-designed propaganda campaigns, too.

Above: Homeland, your mission is accomplished!

Science and Communism Are Inseparable, 1959

Praise to the Brave Sons of Our Motherland, 1959

(via x-ray delta one)

Socialism is our launching pad

Glory to the Soviet people, the pioneers of space! (with Vostok 1-4)

Motherland! You’ve been the first to light a star of progress and peace over the Earth. Glory to science, glory to labor! Glory to the Soviet regime!

The road in the space is Soviet!

The Path For Humans Is Now Cleared!

In the name of Peace and Progress!

Glory to the KPSS! (Communist Party of the Soviet Union)

(via The Mystery World)

Glory to the conquerors of the universe!

They were given a way on the path by the people, the giant and the creator of priceless treasures, and they stood up as heroes of new epic: Gagarin, Titov, Nikolaev, Popovich.

Soviet man, be proud, you opened the road to stars from Earth!

In the name of Peace

The Sons of October Are the Pioneers of the Universe, 1961

(The pictures above are coming from RussiaTrek, except when noted otherwise.)