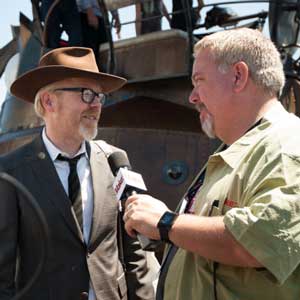 MythBuster and über-maker Adam Savage entered the San Mateo County Fairgrounds riding a steampunk submarine for Maker Faire Bay Area 2013 this morning, and then from his perch in the conning tower imparted his message to thousands of DIY fans assembled.

Savage has been giving something of a keynote speech at Maker Faires since 2008, and his talks always draw huge crowds. Each year he covers a topic to educate and inspire the makers, from the usefulness of failure, to thinking about why people love to make. This year, his message was a simple creed for makers to follow: “Work hard, and work smart.”

For young makers, he stressed “being present” and the importance of focus and patience. When you’re starting out, Adam suggested, realize that “most of work is boring … 90% of it is crushingly exhausting.” The important thing to remember, he says, is that you have to “earn the right to do the 10% that’s really fun by doing the crushingly boring stuff well.”

Just as important is the requirement to work smart. But “you don’t need to be smart to work smartly,” Adam said. His point was that if you ask questions early, own your mistakes, communicate up and down the food chain, and finish what you start, you’ll do fine. ”I’m saying that if you work hard and work smart, your work will be more satisfying and you will enjoy the work that you’re doing.”

After the speech, Adam took questions from the excited audience, and dropped some great tidbits from his career as a Mythbuster and maker: