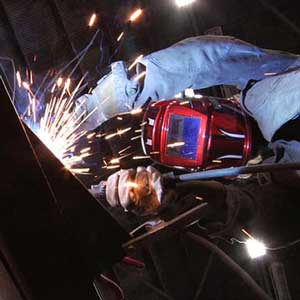 Spoiler alert: Karen Cusolito is an old and dear friend of mine. I had the privilege of working with her in the early and mid-2000’s as part of the Flaming Lotus Girls, a female-focused metal and fire sculpture group.

A December 2012 Smithsonian Magazine interview with Ms. Cusolito is here, with many excellent photographs of her large-scale art.

By Garvin Thomas from nbcNews.com:

Karen Cusolito creates larger-than-life figures out of salvaged steel; some 40 ft. tall and higher. It is what she has done for the Oakland art scene, though, that may be her most important work to date.

Karen Cusolito grew up in New England. She says moving to California almost twenty years ago was like finally taking off a tight, constricting sweater. Karen, an artist, loved the wide-open expanses of the west. That feeling of “bigness” eventually crept into Karen’s art. She is now famous for her 40-plus foot tall figures made out of salvaged steel. But it was her hunt for a space to create her larger-than-life figures that may be Karen’s most important contribution to the Bay Area art scene.

In 2005, Karen walked into the vacant American Steel warehouse in West Oakland. The six-acre building was completely empty. It is anything but empty now. More than 160 artists are working out of American Steel Studios, creating fascinating (and sometimes flaming) works of art.

To see just what an amazing scene it is inside American Steel Studios, watch Garvin Thomas’ story.