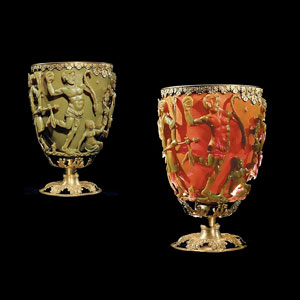 By Zeeya Merali from smithsonianmag.com:

The colorful secret of a 1,600-year-old Roman chalice at the British Museum is the key to a super­sensitive new technology that might help diagnose human disease or pinpoint biohazards at security checkpoints.

The glass chalice, known as the Lycurgus Cup because it bears a scene involving King Lycurgus of Thrace, appears jade green when lit from the front but blood-red when lit from behind—a property that puzzled scientists for decades after the museum acquired the cup in the 1950s. The mystery wasn’t solved until 1990, when researchers in England scrutinized broken fragments under a microscope and discovered that the Roman artisans were nanotechnology pioneers: They’d impregnated the glass with particles of silver and gold, ground down until they were as small as 50 nanometers in diameter, less than one-thousandth the size of a grain of table salt. The exact mixture of the precious metals suggests the Romans knew what they were doing—“an amazing feat,” says one of the researchers, archaeologist Ian Freestone of University College London.

The ancient nanotech works something like this: When hit with light, electrons belonging to the metal flecks vibrate in ways that alter the color depending on the observer’s position. Gang Logan Liu, an engineer at the University of Illinois at Urbana-Champaign, who has long focused on using nanotechnology to diagnose disease, and his colleagues realized that this effect offered untapped potential. “The Romans knew how to make and use nanoparticles for beautiful art,” Liu says. “We wanted to see if this could have scientific applications.”

When various fluids filled the cup, Liu suspected, they would change how the vibrating electrons in the glass interacted, and thus the color. (Today’s home pregnancy tests exploit a separate nano-based phenomenon to turn a white line pink.)

Since the researchers couldn’t put liquid into the precious artifact itself, they instead imprinted billions of tiny wells onto a plastic plate about the size of a postage stamp and sprayed the wells with gold or silver nanoparticles, essentially creating an array with billions of ultra-miniature Lycurgus Cups. When water, oil, sugar solutions and salt solutions were poured into the wells, they displayed a range of easy-to-distinguish colors—light green for water and red for oil, for example. The proto­type was 100 times more sensitive to altered levels of salt in solution than current commercial sensors using similar techniques. It may one day make its way into handheld devices for detecting pathogens in samples of saliva or urine, or for thwarting terrorists trying to carry dangerous liquids onto airplanes.

The original fourth-century A.D. Lycurgus Cup, probably taken out only for special occasions, depicts King Lycurgus ensnared in a tangle of grapevines, presumably for evil acts committed against Dionysus, the Greek god of wine. If inventors manage to develop a new detection tool from this ancient technology, it’ll be Lycurgus’ turn to do the ensnaring. 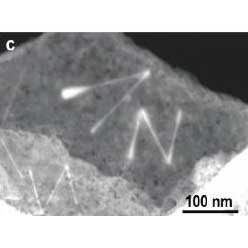 By Lisa Zyga from Phys.org:

(Phys.org) —Nanoscale writing offers a reliable way to record information at extremely high densities, making it a promising tool for patterning nanostructures for a variety of electronic applications. In a recent study, scientists have demonstrated a simple yet effective way to write and draw on the nanoscale by using an electron beam to selectively break the carbon atoms in single-layer graphene.

The researchers, Wei Zhang and Luise Theil Kuhn at the Technical University of Denmark in Roskilde, Denmark; and Qiang Zhang and Meng-Qiang Zhao at Tsinghua University in Beijing, China, have published their study on using electron ink to write on graphene paper in a recent issue of Nanotechnology.

“The ability to record information has been directly correlated with the process of human civilization since ancient times,” Wei Zhang told Phys.org. “Paper and ink are the two essential factors to record history. Currently, information communication has proceeded onto an unprecedented scale.”

Nanoscale writing, which is essentially the manipulation of matter on the nanoscale, has already been widely explored. The current methods can be classified into two groups: lithography (top down), which imprints a pre-made pattern on a substrate, but has restricted resolution; and self-assembly (bottom up), which manipulates atoms or molecules individually, but faces challenges with controllability.

Herein, the researchers proposed a combination method based on both types of methods to overcome the difficulties of each, which they demonstrated on “the thinnest paper in the world”: graphene.

“The rise of graphene calls for broad attention,” Qiang Zhang said. “One distinct characteristic is its flatness, which provides the perfect opportunity to be regarded as the thinnest paper. In order to directly write on this ultimate thin paper, the suitable ink must be found. At the small scale, typically nanoscale, the ink candidate must meet the qualification as both high-resolution writing and visualization function. Therefore, high-energy electrons in a transmission electron microscope (TEM) are the best choice. The electron beam can be manipulated as ink for direct writing, but is by itself invisible.”

When an electron beam (green) writes on graphene paper, some of the carbon atoms in the graphene are kicked off, and external carbon atoms are deposited onto the dangling bonds to form an irregular structure that appears as “ink.” Credit: Wei Zhang, et al. ©2013 IOP Publishing Ltd.