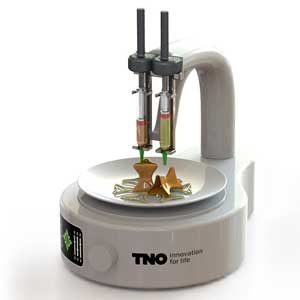 NASA has announced that it will fund construction of the world’s first ever 3D food printer. The American space company has given a $125,000 grant to mechanical engineer Anjan Contractor, who has already designed the machine.

And they hope it will eventually be able to provide food for astronauts on long-distance journeys through space.

Some commentators also say the design is just as exciting for Earth-dwellers, as the machines could eventually become a standard kitchen appliance. Families would then be able to simply print off their dinner, rather than spend time preparing it.

The food printer is fed on cartridges of powders and oils containing all the nutrients needed for a healthy diet — which work in much the same way as a standard printer’s ink cartridges.

The ingredients are sprayed on layer-by-layer by the 3D printer, eventually creating solid three-dimensional food.

It is also thought the printers might help cut food waste globally, as the cartridges wouldn’t go out of date for over 30 years and could only be refilled when they had completely run out.

Contractor told Quartz online magazine: “I think, and many economists think, that current food systems can’t supply 12 billion people sufficiently. So we eventually have to change our perception of what we see as food.”

Once it is up and running, Contractor will test the machine by trying to print a pizza, which was an obvious choice due to its flat shape. The dough will be printed first, then the tomato base, then the “protein-layer” topping.

The report was first published in U.K’s daily national tabloid, the Sun.