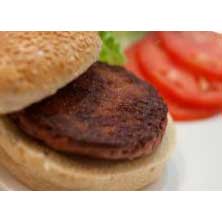 Cooking doesn’t get much weirder than this.

The round, pink mass sizzling in the frying pan looked like any other burger, and probably one from the cheaper end of the market. But the 140g patty, costing the juicy sum of £250,000 (€290,000), was far from ordinary.

It was the first beef burger to be successfully grown from scratch in a laboratory from cow stem cells, and some believe it could usher in a food revolution.

Culinary history was made in London today as two food experts, one a writer and the other a nutritionist, tasted the “cultured meat” in front of an invited audience of 200 journalists and VIP guests.

Their verdict? It looks like beef, feels like beef but does not quite – yet – taste like beef. The burger was cooked in a little sunflower oil and butter by a slightly nervous Richard McGeown, head chef at Couch’s Great House Restaurant in Polperro, Cornwall. After browning for a few minutes it was served up with an accompaniment of lettuce, tomato and bread buns.

American food writer Josh Schonwald, author of the book The Taste of Tomorrow, said after chewing thoughtfully for some time: “The texture, the mouth feel, has a feel like meat.

“The absence is, I feel, the fat. There is a leanness to it. But the bite feels like a conventional hamburger. What is most conspicuous is definitely the flavour.”

Fellow guest, Austrian food scientist and author Hanni Rutzler, who was the first to try the burger, said: “I was expecting the texture to be more soft. There is a bite to it. There is quite some intense taste.

“It’s close to meat — it’s not that juicy but the consistency is perfect.”

Next to take a bite was Dutch scientist Professor Mark Post, who produced the burger in his laboratory at the University of Maastricht, from stem cells taken from two living cows. “I think it’s a very good start,” he said. “This was mostly to prove that we could do it. I’m very happy.”

The tasting event took place at London’s Riverside Studios in Hammersmith on a stage converted into a kitchen/diner. Prof Post believes laboratory grown cultured meat could appear in supermarkets in 10 to 20 years time.

More work has to be done before the artificial meat can compete with the real thing when it comes to taste, Prof Post admits. “There is no fat in here yet,” said. “We’re working on that. It will take a couple of months. We all know some of the flavour comes from the fat and the juices come from the fat, but I think this is a good start.

“We are basically catering towards letting beef eaters eat beef in an environmentally ethical way. Let the vegetarians stay vegetarian.”

He also revealed the identity of the previously unnamed businessman who has financed the project, Google co-founder Sergey Brin.

Muscle stem cells painlessly harvested from two cows raised on organic farms were used to make the cultured beef. In a multi-step process, the cells are first cultivated in a nutrient broth and allowed to proliferate 30-fold. Next they are combined with elastic collagen and attached to Velcro “anchor points” in a culture dish.